One fine summer day on June 9, 2020, an epic event was supposed to take place: the A11y Meetup Berlin get-together in ‘Neurodiversity In Tech’. These being Corona times, the meetup was scheduled to be completely virtual via Google Meets.

For me, the event meant more than just a simple meetup. A chronic illness and disability advocate myself, I am not only open to learning about all kinds of conditions. I am driven by the need to know so that I am able to represent all manner of folks well. Neurodiversity was one of the areas I had yet to come in closer contact with.

Back in January 2020, when I was smack in the middle of speaking more as an advocate, a contact approached me. He was curious whether there were any meetups on neurodiversity. I had heard the term before, but it was still kind of murky for me. I told him that, no, I didn’t know of any groups, but – we could have an event on the topic.

With that, I went into thinking mode. How could we manage to educate the accessibility community and its associates about neurodiversity? Talks and a panel with neurodivergent speakers would be just the thing. So I started organizing. The first panelists came out of my network. And through recommendations, I was able to gather more speakers. Finally, we had our line-up:

Boy, was I proud of my community, of how we got together, and of the speakers! It takes immense courage to go out there and speak about things that are still beset with taboos. To this day, I fear professional repercussions when I talk openly about my chronic illnesses.

Start of the video call

Finally, on June 9 we were ready to go. I had set up the call in Google Meets, as this offered us both the opportunity to record as well as to have automatic subtitles available. In hindsight, I should have done my homework more and sooner. Apparently, it is quite easy to hack Meets.

Starting out, I opened up the call with my short note on definition of neurodiversity, followed by Ian who spoke about his diagnosis with Asperger’s syndrome. By that time, we had gathered roundabout 60 participants, which made me proud and happy. The Meetup.com event had indicated 137 attendees, so considering high no-show levels for virtual calls we had significant participation.

Following that Matthias, our second speaker, was scheduled to detail his experiences with helping people on the autism spectrum secure jobs. What happened next was beyond our imagination. All of a sudden, Matthias had been muted. After unmuting him, it happened again. And again. After a couple of minutes, some of us had figured out that trolls had silenced Matthias and I tried to identify them. This proved pointless, however, as they entered and left the call at will.

While Matthias had started speaking, I had seen more people coming in and approved their joining. My mistake was that I had assumed them to be genuine latecomers. They were not.

Trollin’ on the river

After this had gone on for a while, the trolls started phase 2. Apart from muting more people now, they also shouted “Brazil! Brazil! Brazil!”. One person was specifically enthusiastic. We were unable to catch the wrongdoers as, again, they exited and rejoined swiftly.

By then, the whole meetup had been disrupted to such a degree that a continuation was impossible. My colleague Luca spoke up and suggested setting up a Zoom call – where all participants can be automatically muted by the admins. The opportunity to manually unmute yourself can be turned off.

In between being muted, I told everyone that I would announce the new link on the meetup in the comments. Luca had meanwhile set up the link and sent it to me so we were able to leave the call. Once posted, we joined the new call and quickly saw a satisfying number of joiners come in.

Manually admitting them one by one, we were able to get the number back up to 47. Later on, I had feedback that some were unable to join Zoom due to technical challenges. Others hadn’t been tuned in to the old call joined the new one upon seeing the newlink post. So in summary, it wasn’t as simple as seeing that we had been able to transfer 78% of attendees. Nonetheless, I was happy and proud that they were so interested in continuing!!!

Due to some initial difficulties with Zoom, I kindly asked Matthias if we were able to have the panel first. After that, it was smooth sailing. Vi and Wesley answered my and the audience’s questions and Matthias detailed his Specialisterne experience. With an overtime of about 20 minutes we wrapped up the event.

Later on, I saw that I had received two messages on Meetup and some comments. Me having been so occupied with moderating, I focused on announcing the speakers and panelists and checking our A11y Berlin Twitter for updates. I should have checked Meetup, too.

Before we moved from A to B, there had been some comments about the trolls being Brazilians in the Meets chat. I felt obliged to address this at the end of our call. According to our code of conduct, we show respect. That includes not making any comments about nationality. Trolls will be trolls, independent of their origin or background. It was a good decision to have made the community’s stance clear.

As we had started recording the Meets call, I went to it again to stop the recording. Guess what!? The trolls were still around. The Zoom recording had been sent to my colleague Luca’s Cloud, as he had set up the call. I am now in the process of patching it all together so that we can publish the talks on our YouTube channel.

There are some great learnings to take away from my example

The latter point is important. In the meantime, I received encouraging messages and was praised for my leadership in the situation.

The community is amazing and stands strong. We will weather the storm, get back up and continue our advocacy! 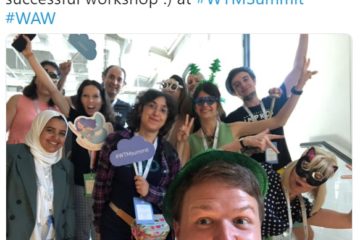 How to make your community event trend on Twitter Since joining the European DevRel team at Google, I have been to a few community events and supported there. The Women Techmakers Summit, which took place Read more…